home automation. who doesn’t want it? but not everybody have the need to control everything. there are times, you just want to turn on or off a light, or fire up the standalone heater before you get home and that’s it. no frill, no complication, just simple flipping the switch from elsewhere. lucky for us, we don’t need to go through the whole nine yards to setup a full-fledge home automation system for such simple applications because there is the Pivot Power Genius WiFi Power Strip. yes. it is the quirky pivoting power strip you know and yes, it is Wi-Fi-ed, albeit only two of the four outlets have such wireless feature built into it. anyway, at $79.99 a pop, it is a tad cheaper than to purchase two separate WeMo Switch, but then again, the choice is yours. but do remember this thing is a power strip, a pivoting one and it does have other benefits over a single unit.

like all things connected, the Pivot Power Genius WiFi Power Strip’s wireless capability is harnessed by an app on your mobile device, allowing you to remotely wield control (actually, it is just switching on and off, really) over whatever that are plugged into the wireless-enabled outlets. you can choose to turn the outlets on or off manually or schedule automatically from anywhere in the world (as long you are connected). the power strip itself features four pivoting outlets that you can pivot accordingly to accommodate virtually all shapes and sizes of adapter and a built-in 1080 joules of surge protection ensures sudden electrical spikes won’t damage your precious AC-powered gadgets. so there you have it, the simplest form of “home automation” that won’t break the bank, and also one that will solve your woes of multitude types of adapter which often renders one or two outlets unusable. the only thing is, do remember to leave the plugged in gadgets or appliances that you want to wirelessly control, turned on, else no amount of magic could ever turn it on.

the Pivot Power Genius WiFi Power Strip is available now from Quirky with a $79.99 sticker. learn more about the awesome of this product in the embedded video below. 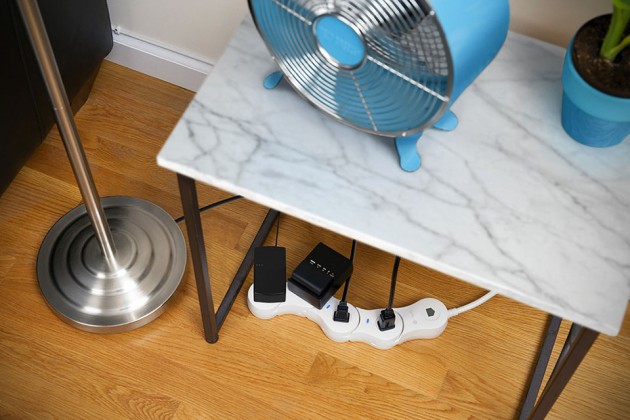