If you have a knack for coding, you probably can make your favorite floppy disk games playable on a smartphone, but you haven’t then, Lazy Game Reviews has a brilliant way that will let you play your cherished classic video games straight from floppy disks… on your smartphone. Well, as it turns out, it is totally doable and TBH, I didn’t quite believe the process is this simple. But here’s a caveat. It only works on Android smartphones (and probably tablets too). 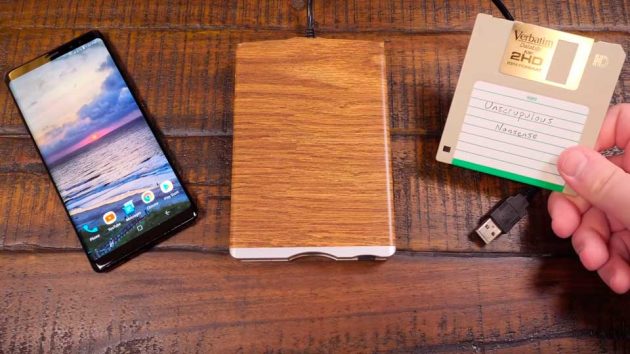 After that, you pretty much good to go. You can choose to transfer the video game to your phone’s storage or you can boot the game directly from the floppy disk. If you don’t know how to go about doing it, then may we suggest that you have a look at this video by Lazy Game Reviews to see how it was done. Obviously, non-touchscreen native games of the bygone era is not going to function flawlessly on a modern day smartphone.

The pixelated video games will have to rely on virtual keyboard to get around, but that means having a transparent keyboard overlaying the game. To resolve this annoying virtual keyboard issue, Lazy Game Reviews enlisted the help of an old keyboard with PS/2 connector and a cheap USB hub. PS/2, btw, is not Playstation 2. That’s the ancient 6-pin mini-DIN connector once used to connect keyboards and mice to a compatible PC system.

Anywho, it works like a charm, but clearly, it is not ideal for on-the-go gaming, with or without the ancient PS/2 keyboard, but hey, it is all in the name of fun and nostalgia, is it not?

P.S. Think Lazy Game Reviews may have a thing for wood grain design because, the phone he use is a Samsung Galaxy Note 8 with wood grain skin on it and the standalone, generic floppy is wrapped in wood grain skin too. The wood grain has nothing to do with how the setup works, but it sure says all lot about this man’s style taste (in a good way, that is).