While McDonald’s maybe enjoying huge reception elsewhere in the world, Burger King in Japan is busy making its own wave by introducing ‘weird’ burgers. We have seen the black burgers from the fast food chain giant’s Japan restaurants, it is now back with another colored burger, this time red is the color of choice. Officially called “Aka Burger” where “Aka” simply means “red” in Japanese, this latest creation comes in two flavors: Aka Samurai Beef and Aka Samurai Chicken. The beef variety touts a thick juicy, fire grilled beef patty no less than 113g and 1 cm thick, while the chicken patty has fresh lettuce and mayonnaise as companions.

Like the black burgers, color takes priority with this “burger oddity” where you will find red cheese and red tomatoes or thick baked onion, depending on whether it is chicken or beef, sandwiched between the red buns along with the beef or chicken patty, and finally topped off with a specially concocted sauce. The sauce is known as “ANGRY sauce,” which judging from the ingredients made up consisting of chili peppers and chili paste, is probably one that’s designed to challenge your tolerance for spiciness. Though there is no telling how hot it is going to get until one actually tries it. Speaking of which, resident in the Land of the Rising Sun will find soon enough when the Red burgers go on sale in Japan on July 3, 2015 (up till August, we heard).

Pricing is pretty much standard, with the Aka Samurai Chicken costing 540 Yen (roughly US$4.35) and the Aka Samurai Beef, 690 Yen (about US$5.56). During the period of Red burger sale, “matching” red pie will also be offered under the “Twin Pie” concept first introduced in March this year. This red pie or Aka pie is essentially cherry pie, wrapped in red crusty pastry (of course!), will sell for 150 Yen, which is about US$1.20 a pop.

P.S. We heard the red buns are results of kneaded of tomato powder, which will carry with them a faint tomato taste, or something along the line. 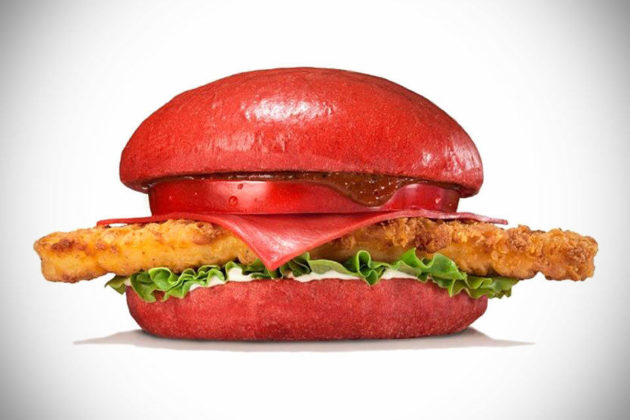