by now we are familiar with the concept behind Steam Machines. basically, it wants to be an alternative to your living gaming. in short, it wants to give dedicated game consoles a run for their money and it even came up with a sleek controller to prove its determination to do so. the hard truth is, however advanced the controllers might be, it can never replace keys like the WASD that’s so deeply entrenched in PC gamers and so it is back to the good’ol keyboard and mouse combo. then again, unless you want to setup a desk in your living, juggling these two pieces of peripherals without a proper table is another set of problem on its own. and that is precisely what the ROCCAT Sova Modular Wireless Keyboard aims to solve, by integrating a mechanical keyboard with an extendable mousepad and an ergonomic palm rest into one singular, neat package. it is like a mini table for your lap, except that those things won’t fall over, well, maybe with the exception of the mouse. 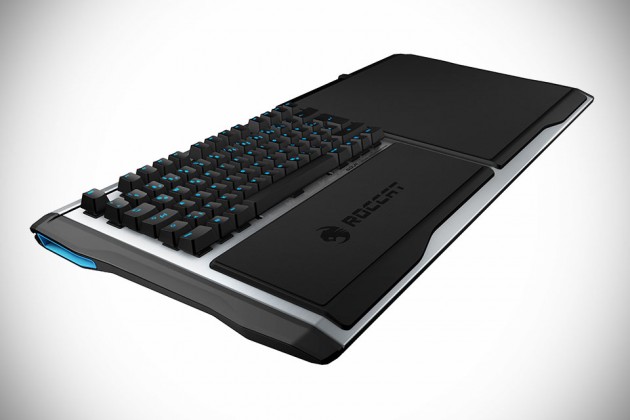 the keyboard sports several USB ports for use with your mouse and other peripherals that you may required for your gaming needs. made out of machined brush aluminum, Sova also packs a battery that’s good for up to 12 hours of usage, while legs-friendly padded rest rounds up the couch gaming package. the Sova is also second-screen-friendly too, syncing with your smartphone which you then can choose to run the free Power-Grid software to provide you with outside-of-game information (such as system information and more), add quick launch buttons to your most used software, and even custom buttons and sliders for your favorite games. no word on when it will be available, but if you happen to be at the E3, you can catch the ROCCAT Sova Modular Wireless Keyboard in person at ROCCAT booth, South Hall Booth #1047, or hit up ROCCA Sova microsite to learn more.