As expected, Samsung has revealed its take on folding phone. There’s no actual phone to show off per se; instead, the device Samsung show off on stage at the 2018 Samsung Developer Conference in San Francisco is a prototype that, IMHO, looks a little too clunky (but strangely alluring. Oops). But it is a working prototype, alright. Plus, the focus is on the display, not an actual device. With the display which it calls Infinity Flex Display, Samsung introduces two screens, as oppose to one as seen on the Royole FlexPai we saw last week. 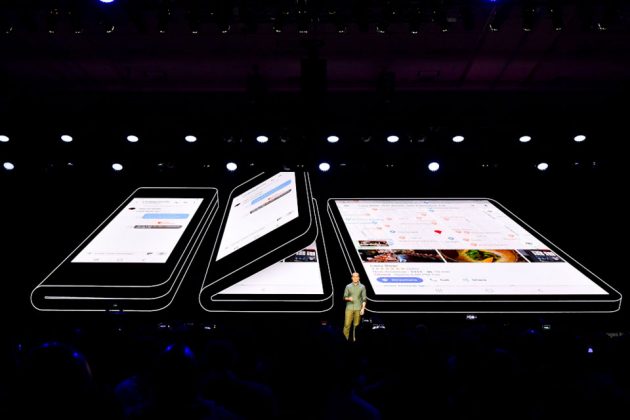 Another key highlight of this reveal is to emphasize how UI and UX works on a flexible display, and how app experience can seamlessly transitions from the smaller display to the larger display as the device unfolds. Samsung said users will be able to “browse, watch, connect and multitask without losing a beat, simultaneously using three apps on the larger display.” Finally, this particular reveal is also serve to entice developers to join Samsung in maximizing the potential of this new form factor to create an optimized foldable user experience.