when we think slot cars, slotted tracks and fancy toy race cars comes to mind. in another word, we expected nothing less than four-wheeled miniature models, but that’s not the case with the The Star Wars Battling Fighters Slot Car Set. unless you have serious skills in piloting RC aircraft, the The Star Wars Battling Fighters Slot Car Set is your best bet in recreating the memorable Death Star “Trench Run” scene from Star Wars Episode IV: A New Hope and being a slot car set, you get the boon of endless run (in this case, chase), unless one knocks out the other. you see, unlike regular slot cars, these spacecrafts, namely Luke Skywalker’s “Red Five” X-Wing and Lord Vader’s TIE Advanced Fighter, from the galaxy far, far away are actually wider than the track which makes overtaking an impossibility without knocking each other or one of the other out of the track.

this set lets you relive the chase scene and strictly chase scene only, so laser cannons are obviously not in the order, but they do have integrated LEDs on each craft when running for the added spacecraft authenticity and also, the set’s 12-foot (3.7 meter) figure-eight track has strips that glows in the dark suitable for lights-out run. so turn off the lights and get a feel of the space chase. at this point, a R2-D2 Planetarium might help to add some authenticity. The Star Wars Battling Fighters Slot Car Set is available from Hammacher Schlemmer for $99.95, or via Amazon for $99.85. another close-up look after the break. 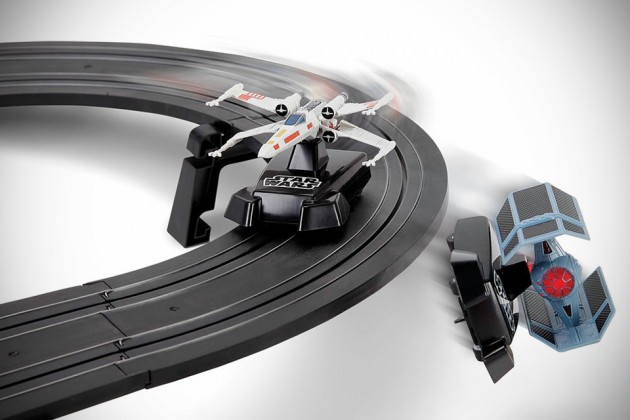