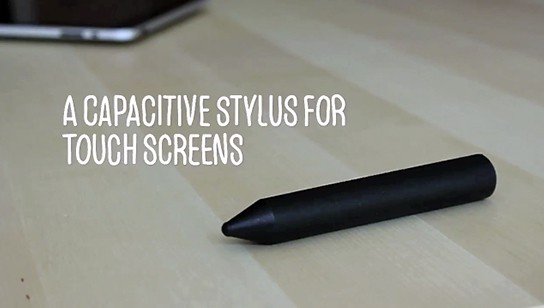 tired of skinny pen-like stylus? then i bet you’re going to dig this. from the folks who brought you the glif, is this adorable wide-grip stylus dubbed The Cosmonaut. the Cosmonaut is not actually a Russian Astronaut but a simple adorably fat, soft grip stylus that reminiscent of a dry erase marker. according to Dan and Tom, writing or doodling on the tablet is nothing like writing on traditional paper, but it is more akin to writing on the whiteboard. which makes a lot sense as our palm can’t touch the screen – which is precisely what you don’t do on a whiteboard.
[ad#Google Adsense-text-468×60]

as with the glif, Dan and Tom are asking for support for their newest endeavor via kickstarter. however, this time round the folks are going with the Pay What You Wish system. you pledge what you think is worth and that’s it. of course, at the end of the day, the minimum goal has to be met in order for the Cosmonaut to take off. if you are keen, then head on down to Dan & Tom’s kickstarter page and make your pledge but you better hurry as there are only 3,000 pledge slots available and during the time of this posting only 935 slots remain. catch the intro video of The Cosmonaut Wide-Grip Stylus below.

via Dan Provost’s The Russians Used a Pencil