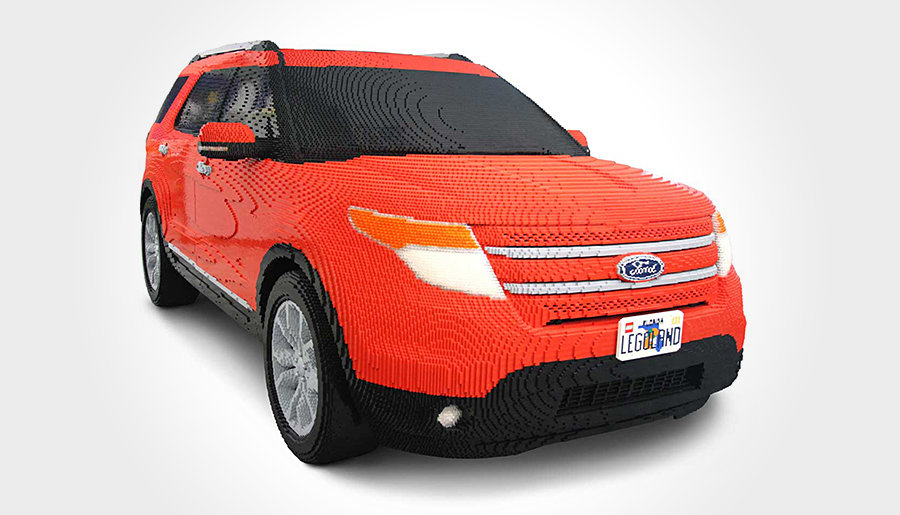 you know what they say about records are meant to be broken. well, that statement is absolutely positive. just when we thought Lene’s Great Wall of LEGO astounding 270,000 individual bricks is mind-boggling, then comes along a life-size replica of the Ford Explorer that was created from an even ming-blowing 380,000 individual LEGO bricks. yes, you heard it right, it is a full-size LEGO Ford Explorer. it took 22 designers and 2,500 hours to complete this 2,654-lbs (1,204-kg) monstrous LEGO model that’s reinforced by a 768-lbs (348-kg) interior aluminum base.
[ad#Google Adsense-text-468×60]

this LEGO work of art made its debut at the Chicago Assembly Plant, after which this unique one-of-the-kind Ford Explorer will be loaded onto a trailer with transparent sides, allowing motorists to see this awesome creation while it make its way to the new LEGOLAND Florida theme park. the LEGOLAND Florida theme park that is slated to open in October 19, is the second and the biggest LEGOLAND park in the world that comprised more than 50 million LEGO bricks. breathtaking? it certainly is but it would better if something more iconic to Ford were created with LEGO. hit past the jump for a time-lapse video of the creation of this unique Explorer.