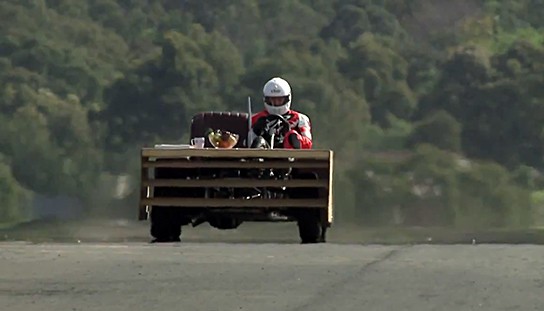 when it comes to furniture, the words ‘World’s Fastest’ hardly come into play, except if your furniture – a couch, in this instant – has an internal combustion engine under the hood, or should i say, under the seat. that’s truly one hot seat that would require you to don a full racing suit, racing shoes, and of course, a helmet when piloting it. especially so when it could hit 101 mph (163.12 km/h). this world record holder for the world’s fastest couch comes complete with a table (and a bowl of fruits to boot), not because of complimenting sake but rather, a necessity to improve its aerodynamic performance. this is one furniture that should compliment Perry Watkins’ world’s fastest dinning table and also betters Chris McIntosh’s leisure motorized recliner chair. though we are not sure why would anyone need a fast couch when we only need it to remain stationary in front of our glorious flat screen TV. anyhow, there’s nothing like a moving image to better illustrate the point that a couch could be just as fast a dinning table, or a vehicle, for that matter. so blast past the jump for a clip of the couch’s attempt on the world record.
[ad#Google Adsense-text-468×60]