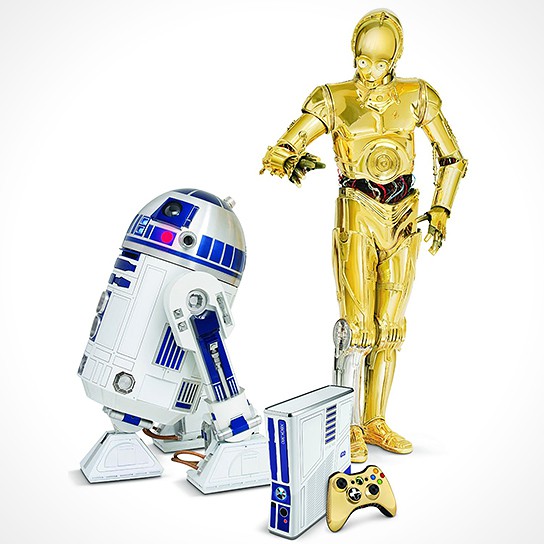 just last week, we had a sneak on the Xbox 360 Star Wars gaming console and amid the excitement, it was finally unveiled at the recent Comic-Con 2011. you probably have heard about it but we are bringing you more official images and plus a short clip about this awesome Xbox 360 in R2-D2 guise. dubbed the Xbox 360 Limited Edition Kinect Star Wars Bundle, it comes fitted with 320-GB hard drive – the biggest storage to be offered by Microsoft to date and bundled with Kinect Star Wars game.
[ad#Google Adsense-text-468×60]

personally, i am not all that excited about waving my hands in the air without a control when playing console games but i am a huge Star Wars, so this might just drive me to become a Xbox 360 user. the Xbox 360 Limited Edition Kinect Star Wars Bundle is set to be released this December with a retail price of $449.99. price include the R2-D2-themed Xbox 360 console with 320-GB hard drive, white edition Kinect sensor, C3-PO-themed Xbox 360 wireless controller, the Kinect Star Wars game, and as well as Kinect Adventure Game. check out a video intro and a gallery of images after the break.