Adidas may have taken pole position in announcing “the world’s first knitted football boot“, but it did not actually unveiled the “real deal” after Nike did. anyway, it has taken the wrap off the Adidas Primeknit FS Football Boot, claiming it as giving “fans a glimpse of the football boots of the future.” so wait, what? you mean the Samba Primeknit wasn’t a “glimpse” of the future? we are a little confused here. billed as the “world’s first all-in-one knitted football boot and sock hybrid” by the Bavarian sports wear maker, the Primeknit FS sports a unique ‘sock silhouette’ design that, together with the knitted construction, offers a bespoke second-skin feel for perfect fit from toe to calf.

Adidas is referring this ‘limited edition’ cleats as being treated as a “concept model” and remains in design phase, but rest assure that it will be released later this year. we are not sure if the ‘release’ is for the consumers or for professional players to put through the paces. the boot has a one-piece design and its strong lightweight yarn construction will provides wearer with “new level of flexibility and comfort with stability and strength equal to that of conventional boots” and it will be of course, coated for resistance against water, plus it has a pretty sleek look and with the high-cut design, Adidas can finally showoff the firm’s three stripes in its full glory. so don’t let the image of grandma’ knits get to you. exact date of availability and pricing are yet to be announced. 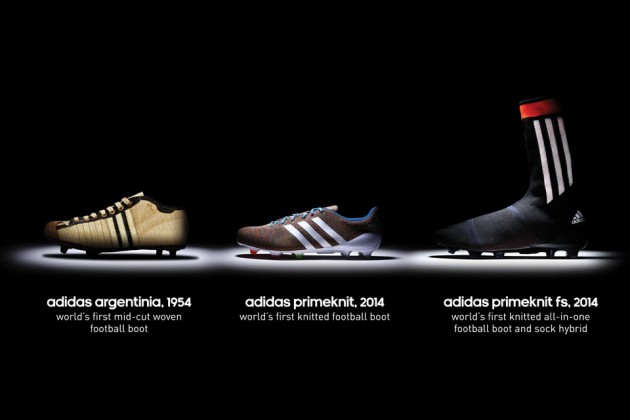