Remember the socially responsible phone that is made from conflict-free materials and by workers who are not underpaid and/or ill-treated? Well, the company behind it, the Netherlands-based phone maker, is back with a second generation Fairphone, aptly named, Fairphone 2. This latest iteration maintains the very ethos the company lives by and now promised more in terms of hardware features. Starting with a replaceable outer shell that acts as a protective case which you can replace as you see if or to suit the occasion.

The phone’s back cover will be offered based on the level of protection, so you can save yourself from getting addition accessory to keep the phone out of harm’s way. This means if you phone’s casing is thrash, you have the liberty to change it, or in the event you are heading into the wild, you can switch up to a tougher body, for example. As it is, the phone is built to stand up to some pretty rough treatment, including take a drop from heights up to 6 feet onto concrete. In addition, it now sports a modular design much like Project Ara and the Puzzlephone we saw late last year, which means if any breaks, it can be replaced without trading in the entire device. But that, of course, will depend on what component is broken. 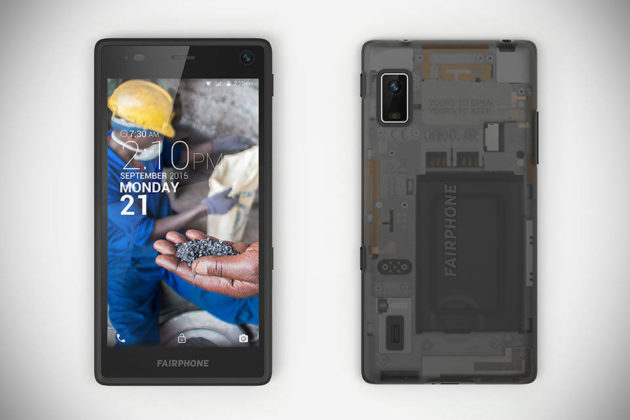 Being modular also means, the device will be user upgradable as and when newer components are available, or so we read. On the spec-sheet, the Qualcomm Snapdragon 801 chip-powered smartphone boasts a 5” FHD display with Corning Gorilla Glass 3, 2GB of RAM and 32GB of onboard storage, expandable storage via microSD card slot, a 8MP rear-facing camera, a 2,420 mAh removable lithium-ion battery, 4G LTE radios (3G/2G supported too, naturally), wireless b/g/n/ac, Bluetooth 4.0 LE, GPS, plus dual SIM card support.

While it is touted as modular, do not expect to perform magic like Project Ara attempts to. Modularity is limited to components like battery, display, rear camera, speaker, “receiver unit”, and “transceiver unit.” The Fairphone anticipates taking preorder this summer with the device costing €525. As before, Fairphone will also be providing you with a break down of the cost, so you know what you are paying for.

Fairphone via The Awesomer