In Star Wars movies, the adorable astromech droid R2-D2 is useful in many situations which needs no detailing; meanwhile on planet Earth, he is useful too, such as keeping beverages cold, charging your smartphone, spilling out water so you can get an awesome shower, and now, he will even make you some delightful, heathy popcorn for you to consume as you put yourself through a gruelling movie marathon. Officially refer to as Star Wars R2-D2 Air Popper Popcorn Maker, this officially licensed Star Wars merchandise by Underground Toys stands around 13 inches tall and leverages on hot air to magically turns kernels into movie-requisite delicious munchies. 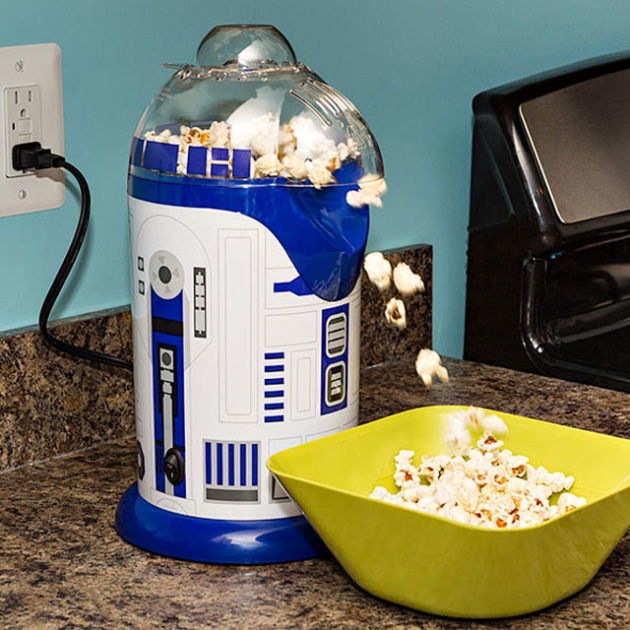 It comes with a clear cover so you will be in the know of what’s happening within popcorn-making droid and there’s a measuring cup which also doubles as a top cover when it is busy popping the kernels. The only caveat here is, popping popcorns requires a fair amount of electrical power, or 120V to be precise, which means you can’t have it on your coffee table (unless your table happens to have an outlet) and demand it to churn out popcorns as the movie proceeds. It can’t wheel itself around too, but for $49.99, you can’t really ask for the entire works.

Also, I am guessing making popcorn is a intricate process, so dear Artoo has to sacrifice many of its onboard equipment, including oil-slick arm, torso diagnostic unit, power recharge coupler, manipulator arm, holo projector et cetera, in-order to satisfy his master’s (that’s you, btw) insatiable appetite for munching on something while watching movies.

NOW READ  The Mandalorian The Child Chia Planters: For Those Who Can’t Enough Of Grogu