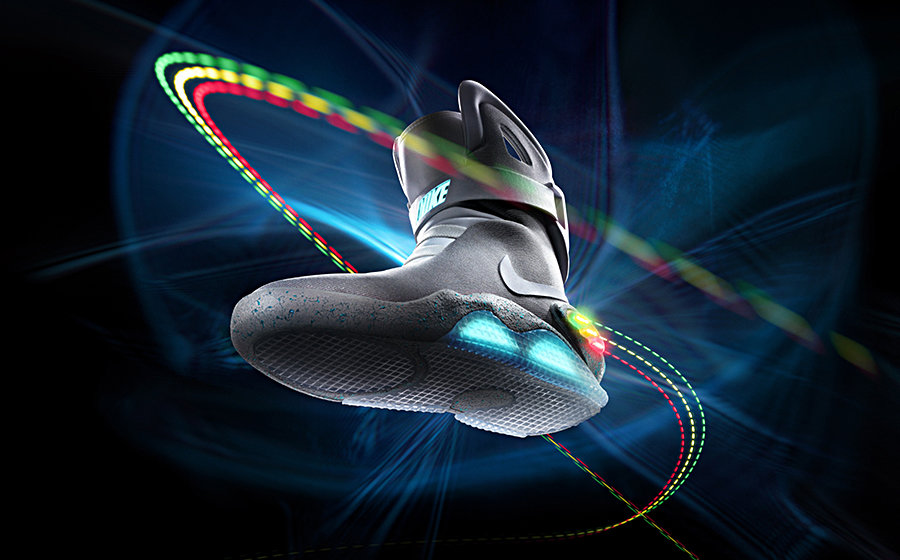 (image: Nike) Nike Mag aka Back to the Future Shoes | US$auction | www.nike.com

the movie, Back to the Future II (Universal Pictures, 1986) treated us to loads of fantasy tech that ranges from technologies like holographic billboard, transports like Jetson-ish flying car and of course, fashion like auto-drying/sizing jacket and auto-lace-up boots. speaking of which, that drool-worthy Nike hi-cut sneakers (known as Nike MAG) are a reality now. aesthetically, the shoes are constructed to look exactly like the shoes depicted in the 1986 movie, right down to the contours of the upper and complete with a functioning glowing LED panel on its outer sole and an electroluminescent NIKE in the strap. a pinch on the “ear” of the high top activates the LED that will stay lit for 5-hours per charge. though, auto-lacing remains as a fantasy tech for now.
[ad#Google Adsense-text-468×60]

the good news is, you can actually own a pair or two of the Nike MAG as 1,500 pairs will be auctioned on eBay and for a good cause. all proceeds from the auction will go directly to The Michael J. Fox Foundation in hope to find a cure for Parkinson’s disease. each day, 150 pairs of the 2011 Nike MAG will be put up for auction, starting from September 8, 8:30PM PST (September 9, 11:30AM SGT), for a duration of ten days. if you want you hands on one of these future-classics, then you better keep your eyes glued to eBay’s Fashion Vault. [UPDATE] ready to bid? then head on down to Nike MAG eBay to bid for them before the hammer goes down but be warned, you are looking at a sum of at least four figures.