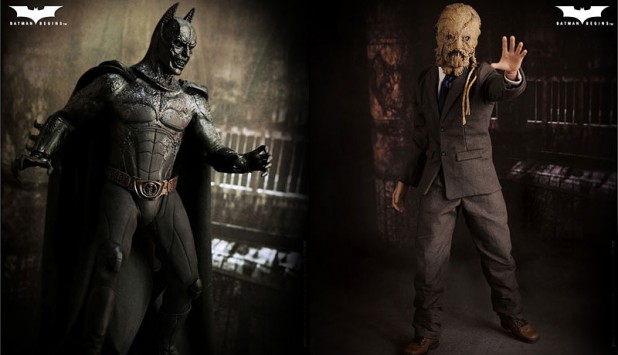 Sideshow Collectibles and Hot Toys’ Demon Batman and Scarecrow appears as fast as it is gone. that said, there are no two words that shoppers hate most than the words ‘Sold Out’. this pair of 12-inch figures from the Batman Begins movie were announced recently and they were sold out at the time of this posting. however, you can always put yourself on the wait list for a pair of those. out of stock or not, that won’t stop me from featuring these pair of awesome figures. both Demon Batman and Scarecrow are authentically detailed to the likeness of the characters in the Batman Begin movie (Warner Bros., 2005) – the first of Christian Nolan’s big screen rendition of the Dark Knight.
[ad#Google Adsense-text-468×60]

both figures features 30-points of articulation and stands approximately 30-centimeter (12-inches) tall. as with any good Sideshow Collectibles and Hot Toys’ products, these figures features interchangeable hands and boots. Demon Batman even has a set of palms that let it hold Scarecrow’s neck. i thought that was a super cool feature. when you do that, remember to voice over with a coarse voice that says: “die, you sandbag head evil-doer!” anyway, that’s just my personal fantasy. both figures come with its own figure stand with their respective nameplate and movie logo, and i must say the price is quite a bargain too – $299.99 for both figures.