Special effect artist Frank Ippolito is known for his work on movies like Pirates of the Caribbean: Dead Man’s Chest, The Chronicles of Riddick, and Casanova, and he had hands in helping Adam Savage to create the amazing Admiral Ackbar cosplay for Adam’s incognito entrance at Comic-Con. You may not know Frank, but he latest creation is definitely going to make any Star Wars fans go gaga. I promised. Recently featured on Tested.com, Frank created, wait for it… a Star Wars Han Solo in Carbonite Refrigerator. Yup. On.A.Freaking refrigerator. How cool (pun, not intended, btw) is that? We have seen many Han Solo in Carbonite iterations, ranging from plain 2D sticker to life-size figure to coffee table, but there’s little doubt that Frank’s fridge takes the cake. 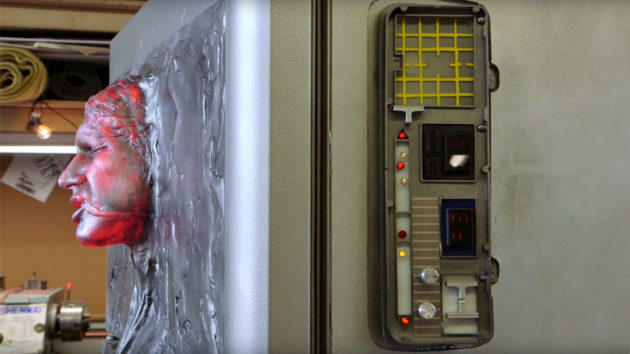 Not only did Frank and team made a detailed replica, but they also went all out, taking care to include the side panel that lights up, albeit only on one side. The side panel, specifically the one to left of the fridge, is also home to a control to a secret of Frank’s Han Solo in Carbonite Refrigerator: Han grows in red – thanks to the embedded LEDs – to mimic the moment when Leia, who masquerade as a bounty hunter, turn the switch to unfreeze him at Jabba the Hut’s lair. If you ask me, the effect Frank and his team created appears to be more realistic than that of the original movie cos’ in the movie, it was obvious that glowing special effect was layered over the prop.

Frank’s creation, however, shows clearly the glow comes from within, which is how it supposed to be and the pulsating LEDs serve to make the whole thing pops. Looking at the final product, we have no doubt that this Star Wars Han Solo in Carbonite Refrigerator is one of the coolest, if not the coolest, Star Wars build yet. Unfortunately, no amount of money in the world will get you this super cool refrigerator, but if you have the knack for technical stuff and casting (and a decently equipped workshop), then maybe, just maybe, you could build one yourself.

Scroll down for Nor’s interview with Frank and a quick build look in the video below. And for a little refresher, scroll down further, to find a clip of Leia flicking the switch to defrost dear Han from his Carbonite state. You’re welcome. 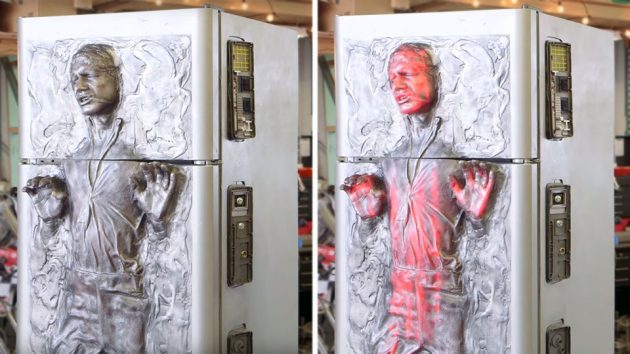