Thanks to the continual love shown by people, vinyl records have risen to rub shoulders with its digital counterpart and the love given to it by music lovers has also lead to inventive folks coming out with brilliant turntables, or as some would call it, record players. To this end, we have seen quite a bit of them in recent years, including ‘audacious’ propositions like stylus-spins-record-static examples like the RokBlok and the app-enabled Love Intelligent Turntable, and even ‘floating’ turnable like the vertical turntable and even one that levitates, but nothing appears to be more surreal than one that’s so minimal that it is just, well, a wheel. 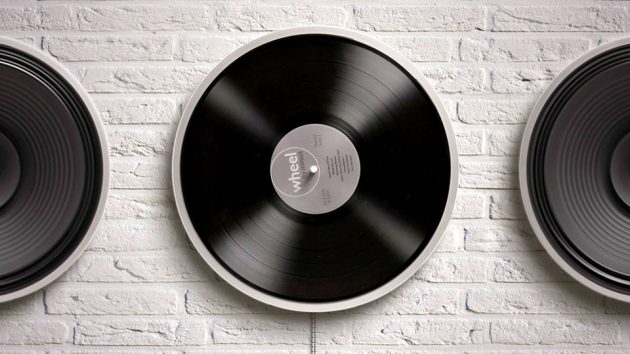 Aptly called Wheel, this uber cool turntable is the brainchild of Netherlands-based family business, Miniot (yep, the same company makes wood smart cover for iPad), and as you can see from the image(s), this record player is nothing more than a circular platter, and clearly, it wins in minimalism as far as turntable is concerned. Seriously, you can’t get any minimal than a round thing that can actually spits out music, can you? It is so analog and yet so high tech – all at the same time.

Everything that needs to get a record playing, including the motor, the tone arm, cartridge, electronics and whatnot, is packed inside the wheel. There’s no fancy app or conversion here; it is just the good’ol RCA connectors to output the undistorted signal picked up by the AT95E cartridge it is equipped with. Though you do have the liberty to choose between phono or pre-amp line signal, or if you so desire, output the audio through a 3.5mm audio jack. 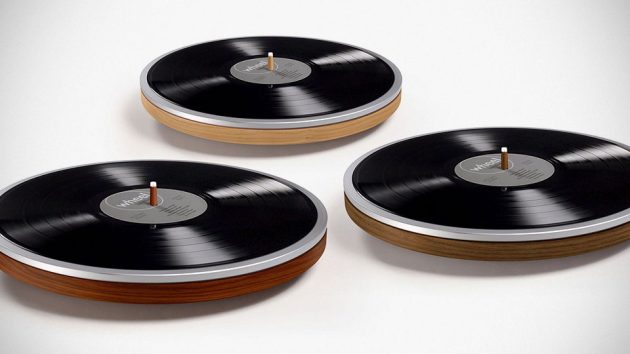 Control is worthy of a mention too, because it really is unique and novel at the same time. Again, there’s no fancy remote or app here to make Wheel to do your biddings; it is just a stick that you see sticking out of the center of the device. The stick uses real switches to enable adjustment of volume output through the headphone port (by turning clockwise or counterclockwise), as well as enabling on/off, play/pause, skip track functions. Like I said, you can’t get any more minimal then this.

Finally, since everything happens beneath the records, the Dutch outfit has decided to include a transparent LP loaded with music from the best Dutch musicians so you can spin the record while marvelling at the inside of the wheel simultaneously. Wheel by Miniot has four days left on Kickstarter, but as you may have guessed, such novel tech always get the right amount of attention and as such, it is no surprised that the campaign is quite received – as proven by the nods and financial backing it has received from nearly 700 backers who have helped make Wheel a reality.

If you are up for it too, you can join in the party, but at a hefty price (as expected from such novelty tech) of 645 euros (about US$690). Also, it will be quite a wait before it gets shipped. Estimated delivery is indicated as “Feb 2018” and so, apart from dropping hefty amount, there’s a long wait to content with. Just saying…