I can’t believe no one dresses up as Han Solo… in Carbonite for Comic-Con and Halloween. Or maybe there were? I can’t say for sure. Anywho, in case you are a Star Wars fan and wanted to dress up as a different kind of Solo (a less than suave Solo, that is), then you may want to give the Inflatable Han Solo Carbonite Costume a thought. It works like the inflatable dinosaurs, but this particular item from Rubie’s Costume Company is, obviously, not a dino.

It is inflated using the included battery-powered fan which you will wear on your waist and it comes with hope and loop closure to secure the inflated block to you. Also included are a mask and gloves in the appropriate carbonite color to complete the look without you having to paint your hands and face. Agonizing face is totally optional. It looks like your hands will be free to move, albeit not large movements. I wonder how it perform picking up cocktail drinks from the table? Will the carbonite block sweep everything off the table like the Wolf Spider costume definitely will?

Though it is worthy to note that, unlike the popular dinosaur inflatable costume, you won’t be hot like hell (in the literal sense) because, fortunately, you will not be stuffing yourself inside the inflatable (thanks Rubie’s for that!). If you want one, you can pre-order it now and wait for it to be ship on September 18, 2018. The list price for it was $77.99, but the last we checked, the price has been slashed by 16 percent and it is now going for $65.26. Or if you prefer not to spend this much, you may create a half-size Han Solo in Carbonite costume like this guy did.

Here’s the instruction showing the flip side of the costume: 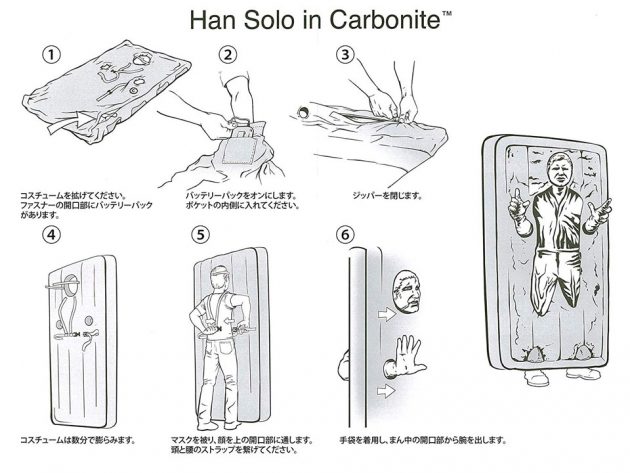