While modern mobile phone may not surpass the tech of the fictional Star Trek Communicator, it is nevertheless an achievement of mankind. But fans won’t be amused, because even the most similar looking cell, the Motorola StarTac, looks nothing like the beauty as seen in The Original Series. Disgruntled? Well, you shouldn’t be because a ‘functional’ Star Trek Communicator is a reality. Ok, maybe it won’t function as a transponder, nor will it let you communicate through space, defying the laws of physics, but the Original Series Star Trek Bluetooth Communicator by The Wand Company is as close you can get to the real deal. 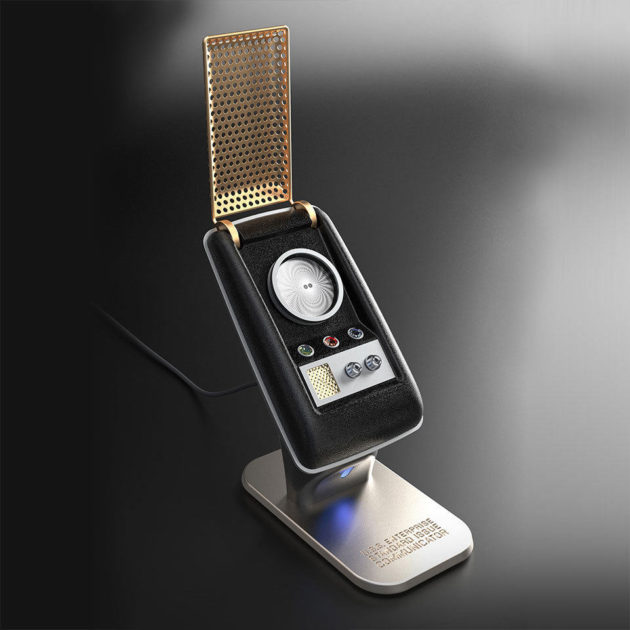 Unveiled at the San Diego Comic-Con early this month, the Original Series Star Trek Bluetooth Communicator is a highly detailed and accurate replica of the show’s last remaining hero props. Structured-light 3D scanning was used to capture all the details, right down to the curve and line to reproduce the product you see here today. As far as the product photos go, it looks exactly like the Communicator I have remembered. The only thing is, it is not quite a communicator per se. Instead, it is a Bluetooth speaker that serves as a speakerphone and doubles as a super cool desktop speaker. The coolest part, though is flicking the antenna grille to take calls, just like it should be.

The Original Series Star Trek Bluetooth Communicator is available for pre-order from ThinkGeek, priced at $149.99. At the SDCC, ThinkGeek also unveiled a series of delightful products that beckons you to part with your hard earn money and they include Star-Lord Knapsack, Action Figure Beach Blanket, Knight Rider K.I.T.T. Car Charger, Tesla Styled Watch, Black Widow Light-up T-Shirt, and R2-D2 Bluetooth Speakerphone (holographic projection not available). You can hit up ThinkGeek website for availability and prices.