i am sure you folks remember the cardboard-based VR headset introduced by Google. if you were like me who can’t get down to source for the materials or lack of the technical hands to craft one, or both, then you might want to check out the Virtual Reality Cardboard Toolkit by DODOcase. you may wonder, ‘why bother buying a kit when you can make one?’ well, in reality, those materials that were supposedly easily available like the lenses, magnetic ring and such, turns out to be not so accessible, at least, not without making multiple trips to your local hardware stores. so, if you really want one cheap alternative to pricier items like the LG x Vortex VR VRTX I or Samsung Gear VR, this might be it. the brilliant thing about this kit is obvious: it has everything you need to put together the cardboard VR headset, including an awesome pre-cut cardboard, bi-convex lenses, magnet, as well as velcro, saving you the hassle of sourcing for the materials. 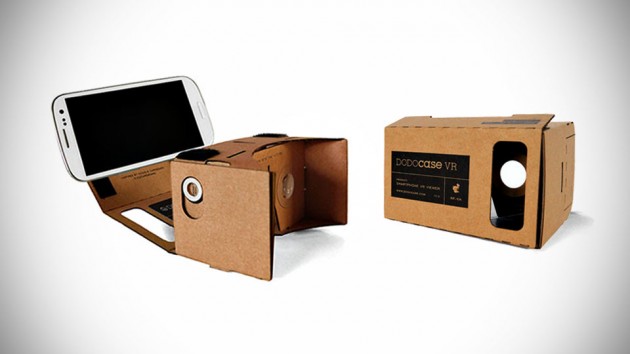 it will take you under 10 minutes to put them together and is compatible with both Android phones and iPhones. there are two versions available: V1.2, featuring a new and improved capacitive touch button mechanism that works with all devices including the latest iPhone 6 and iPhone 6 Plus, and V1.1, boosting an original magnet ring switch that works with a handful of listed devices, including Google Nexus 4/5, Motorola Moto X, Samsung Galaxy S4/S5, as well as Galaxy Nexus. both retails for $24.95 per kit, but the V1.2 will only start shipping starting October 6, while the V1.1 is available for immediate shipping. take your pick.