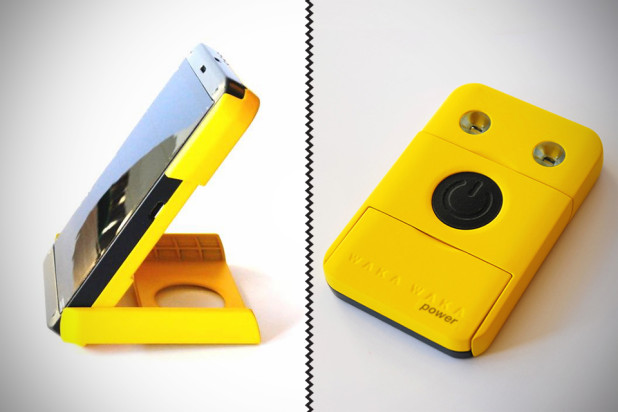 getting hit by a flat battery is the worst nightmare for any gadget users. naturally, being an intelligent beings, we managed to overcome that shortcoming with portable battery but it still begs the question: what if your portable battery ran out of juice as well and there isn’t a wall outlet in sight? this is a situation that calls for the WakaWaka Power, a compact solar power station that takes what the Mother Nature has for us via solar panel and packs it into its 2,200 mAh lithium polymer battery, ready for you to juice up your smartphone and tablet of virtually any make and model. the WakaWaka Power employs super efficient solar cells and a power management system that its maker proudly claim an efficiency that’s up to 200 percent over its competitors. along side its ability to charge your portable gadgets, the WakaWaka Power is also equipped with a pair of LED flashlight (with 60 lumen combined) which, when on full charge, is capable of sustaining more than 40 hours of light up time and even if you have used it to juiced up your phone to full, it is still able to delivery 10 or more hours of lighting. charging up your WakaWaka Power is as simple as leaving it in direct sunlight for one full day and according to WakaWaka, the intensity of the sun (overcast or whatever) will not affect capacity to pack in the charges. clad in recyclable ABS plastic in WakaWaka signature yellow hue, the WakaWaka Power is dotted with small informative LEDs that let you know its battery status, when it is charging up by the sun and even when you are charging up your cell. you can get your WakaWaka Power Solar Power Station with a starting price of $59 via the current hottest crowdfunding platform, Kickstarter. check out a pledge video after the break and find out how you will be doing a tiny bit when you purchase this awesome gadget accessory.