movies often provides us insight to future gizmos and gadgets that has inspired scientists in the real world. this week, we take a look at the top ten gadgets in movies that truly inspires and excites us…
[ad#Google Adsense-text-468×60] 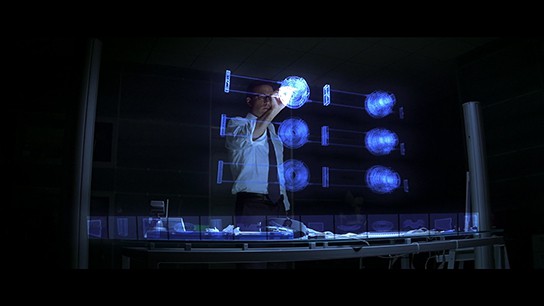 Michael Jennings (Ben Affleck) is a reverse engineer. he breaks down other folks’ technology and reverse engineered it (and make it better, of course) for competing firm for a handsome amount of money. Jennings bought a consumer glass-less 3D display, tear it down and in 2-months, he created a monitor-less 3D projector but that’s not what we were after. it is what he used to break down the hardware to do his reverse engineering magic that’s worthy of a mention. basically, the product was torn down and plugged into his specialized hardware scanning monitor that breaks down every inch of the hardware – all presented in a display that consists of nothing but two thick poles on each side of his work table. imagery of the broken down hardware can be rotated, zoomed and break apart piece by piece just by using two styluses. 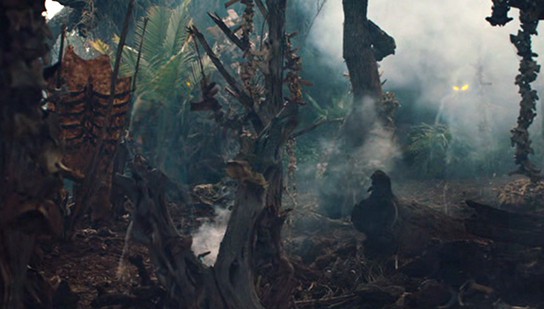 spot where are the predators…

remember the green blooded alien hunter who hunts human during their version of open season? well, it ain’t a fair game as far as we human are concerned. those bloody hunters have invisibility cloak! they sees us we can’t see them. even deers get to see us if ain’t careful during a game. scientists have been working on cloaking device, among them was a Japanese who managed to project what’s behind him to the front of his rain coat-like clothing and apparently, someone has managed to create a material that bends light, thus rendering anything that it wraps around disappear. i would think spies and military recons would love this gadget but lets hope if this thing becomes a reality, it don’t fall into the wrong hands. remember what happened in Get Smart’s Bruce And Lloyd Out Of Control? 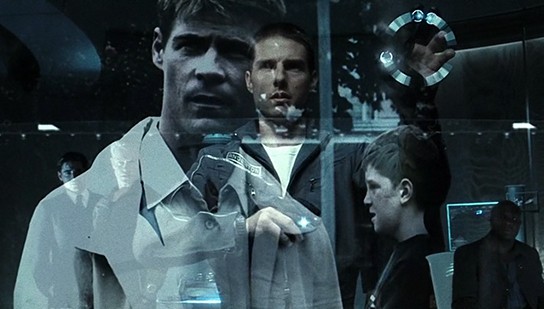 this Steven Spielberg’s sci-fi is packed with sophisticated future gadgets, which include robotic spiders, personalized advertising, compact jetpack, moving ads in newspaper, among the many others. what was portrayed in the movie isn’t that far fetch at all, in fact most of these technologies are already coming to life. the innovation of the paper thin, foldable LCD display could be in our newspaper sooner than we thought and an army of robotic spiders are being developed by BAE Systems which are intended for military and homeland security applications. the intelligent spiders that are capable to work in packs creeps us out a little but what awe us most was the gesture user interface which pre-crime cop, John Anderson (Tom Cruise), uses to manipulate and search for data on the pre-crime department database. gesture UI is set to become a reality and last year, Hitachi showcased a similar system at the CEATEC Japan 2010. pre-crime department sounds a little too far-fetch but i’m sure the public information could benefit from such a techology. 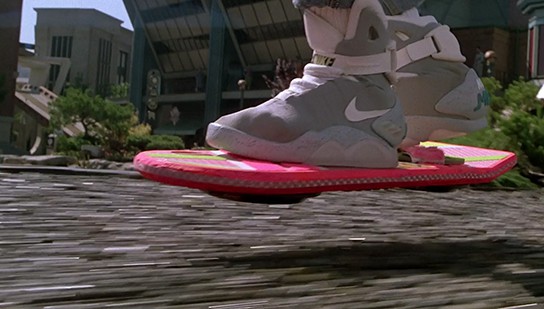 pink hoverboard from Mattel of the future

remember the wheel-less, hovering skateboard from the future-set sequel where Marty McFly (Michael J Fox) used in the memorable hoverboard chase scene? unlike what the movie suggested, we are not going to see hoverboard anytime soon, though someone actually tried to create one but the reality is, we can’t actually balance ourselves on piece of tiny board, let alone trying to use it to escape from any dire situations and kicking the air? seriously? nevertheless, it has managed to awe us until today. the hoverboard happens to be my personal favorite too, other than the self-drying jacket, and the auto-shoe-lace-tying Nike boots, and the glass-less 3D billboard, and the flying cars… awww… there are just too many of these fantasy techs. my hopes are high cos’ we’re nearing 2015, aren’t we? 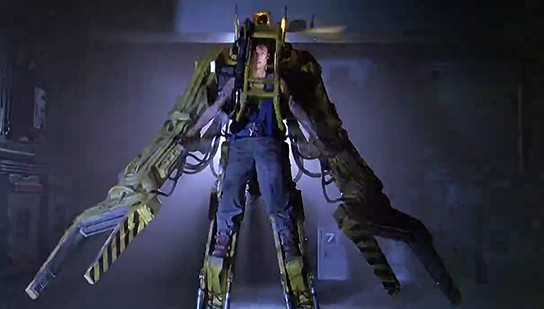 Ripley (Sigourney Weaver) wrestled out with the Alien Queen in the finale of this defining alien movie in the movie history of our time. the Power Loader doesn’t have any form of weapons, neither does it has those fancy HUD but it is, well, a trusty power loader that amplifies human power by x number of times, thus enabling Ripley to slug it out with acid-drooling Alien. the Power Loader is kind of like a bulk-up exoskeleton suit built for loading jobs but as we all know, it is totally capable of hammering an alien just as well too. we may not have such a mammoth-sized power loader now, but the one from Panasonic should do just fine for now (among the many others currently being tested). 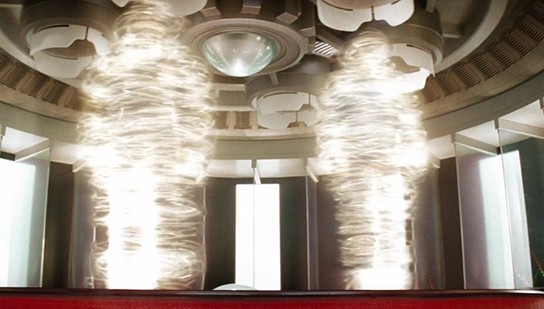 the transporter beams you almost anywhere. imagine how much time we could save?

teleportation, surprisingly, isn’t portrayed in many sci-fi movies. at least not as much as Star Trek does. beaming a person has become a staple in Star Trek series, besides the communicator which pretty much inspired the world first mobile phone. how nice if we could be beamed from one place to another? maybe, just to replace the elevator for a start? if a gadget like the Transporter is possible, you can imagine the convenience it would bring to mankind. take for example, space station astronauts can be beamed to and fro the space station and earth, and the next thing you know, manning a space station could be just another 9-5 job. theoretically, teleportation might just be plausible but we certainly don’t want to end up turning into a fly or something else, other than our original self. henceforth, teleportation won’t be happening anytime soon – at least not for living things.

(7) Toaster Knife, The Hitchhiker’s Guide to the Galaxy (Touchstone Pictures, 2005) 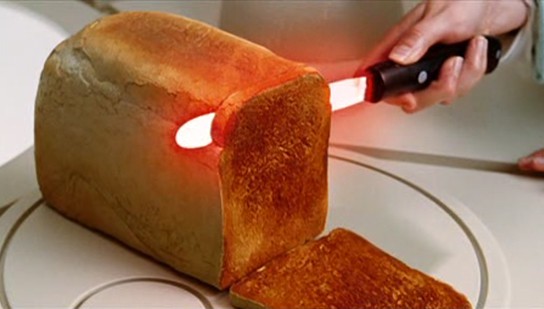 one of the few British sci-fi that we all love and one of the few that has the earth totally destroyed and vanished from the solar system (apparently, by mistake). when Arthur Dent (Martin Freeman) managed to escape the annihilation with the help of an alien friend, Ford Prefect (Mos Def), and a twist of faith, brought them onboard a stolen spaceship, “Heart of Gold”, stolen by none other than the President of the Galaxy himself. while on board the spaceship, Arthur met another earthling (Trillian played by Zooey Deschanel) who happens to be a girl he fancy back on earth. Tillian gave Arty a short intro of a couple of technology on board and one of them was a knife that toast while it slices. i love toast, so what’s better than having a bread knife that looks like a pocket-knife version of the light saber which toasts your bread as you slices them? awesome x 10. it is one of those sci-fi gadgets that will remain sci-fi. so for now, it will still be just the toaster plus bread knife combo to do the job. what a chore, isn’t it? can’t we just do it in one swift cut? 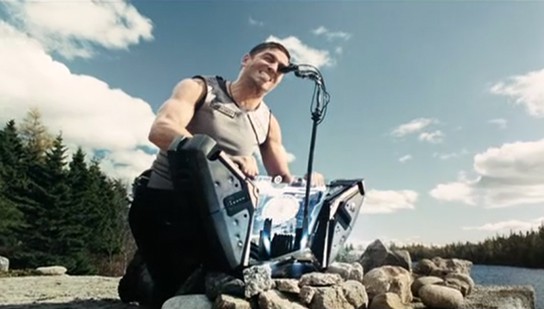 education? what education when you have this wonderful machine?

this little known movie is not your usual sci-fi movie and it wasn’t a blockbuster hit to start with but it represents what the future might hold for the ultimate in survival kit. when alien-being Kainan (James Caviezel) crash-landed to earth, he retrieved a machine that survived the crash. in it, is the gadget that provides him all the info such as where he was, the language spoken and the race et cetera. it scans the space for nearby space vessels, set off the rescue beacon and wait for this, download the language spoken (among other information) into him via his eye. wow. who needs to go to school with this cool gadget? sadly, we don’t have such language downloading capability, so we just have to content with language translators, googling and wikipedia to manually learn those information that we want. but be patience, apparently scientists has carried out ‘cybernetic implants’ in some experiment, so it might just be a real world tech pretty soon. though it won’t be as convenient as downloading via our eye. 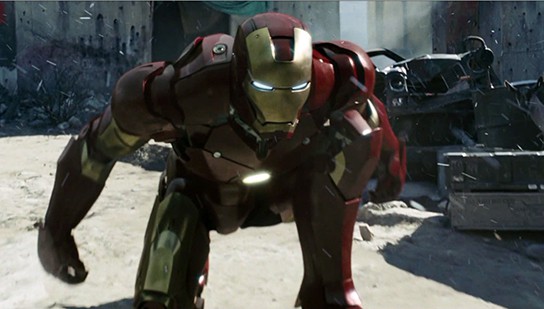 Iron Man the movie outperforms its comic counterpart in term of flashy-ness. we have never given much attention to this red-gold exoskeleton suit until Robert Downey Jr puts it on and show it off to the world in flesh and metal, so to speak. powered by a future-tech Arc Reactor, which also kept him alive by keeping the shrapnels away from his heart, this exoskeleton suit is capable of flying at an insane fast speed, launch mini-rockets, shoot repulsor rays from its palm and have superhuman strength that enables him to smash through just about anything. thankfully or not, similar technology has evolved in recent years in the form of Cyberdyne’s Robotic Suit HAL and Raytheon’s Exoskeleton Suit. though, however, we still can’t fly in our exoskeleton suit or launch rockets from our shoulders or withstand a few stories fall in it. as a consolation, these exoskeleton suit will not make a hole on your roof. 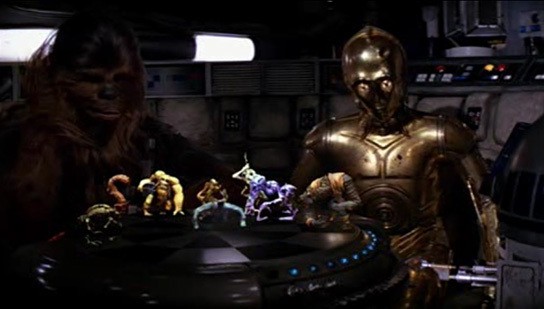 woo…woo… (translation: damn you, for bringing down my alien monster, C3PO!)

Star Wars is probably the grand old daddy of all sci-fi movie. A New Hope dazzled us with an insane number of snazzy future-tech that is light years ahead of its time. suddenly, life is more than just Woodstocks and bell bottom pants. these gadgets galore ranges from hover cars, laser blasters, droids that think and sometimes talk gibberish and of course, the crowd favorite, the razor sharp light sabers. oh, they even have a space station called Death Star which is about the size of the moon. incredible. we are totally astounded even after 34 years on. amidst all these dazzling techs, there was the holographic chess set where alien monsters pieces walk, jump from from square to square slugging it out. kinda cute, don’t you think so?